skip to main | skip to sidebar

You Might Want to Think Twice About Visiting Montana This Summer! 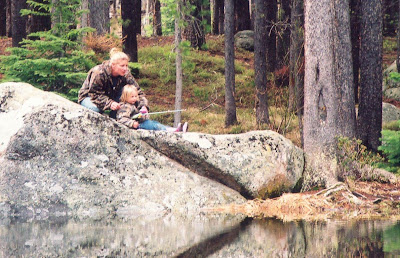 Before making the move to Montana almost four years ago, it was the beauty of the mountains, wide valleys, fast running clear streams, wooded ridges and back country lakes that had drawn me here again and again, year after year. Right at the top of all the natural draws which kept me returning was an abundance of wildlife. On any given day in the western half of this huge state, I could possibly see elk, mule deer, buffalo, whitetails, mountain goats, pronghorns, black bear, bighorn sheep, and Shiras moose - with the occasional chance of spotting a mountain lion, grizzly, wolf, or possibly even a wolverine.

Being an avid hunter, it was the diversity of hunting opportunities that finally helped me to decide that Montana is where I wanted to live the rest of my life. Well, that and one very sweet Montana gal with which I had fallen in love. She loves the outdoors every bit as much as I do. And we get out as often as we can, camping just about every weekend during good weather...and often even when it's not so good.

With this said, the title of this piece might make you wonder, "What has changed?"

Unfortunately, a whole lot. And that change began back during the 1970s and 1980s, with the introduction of the non-native Canadian gray wolf into the Northern Rockies. Now, you are probably saying to yourself, "But the Northern Rockies Wolf Recovery Project did not begin until the release of the first wolves in 1995."

But, did it really? There are growing suspicions, and evidence, that the U.S. Fish and Wildlife Service, without any authorization whatsoever, released small "experimental" populations of Canadian trapped wolves into remote areas of Montana, Idaho and into Yellowstone National Parks itself in northwest Wyoming. And there is also a growing feeling that those efforts were aided by wildlife studies academics with the University of Montana. Of course, such unauthorized release of wolves is illegal, and that's exactly why USFWS and U of M environmentalists covertly made those transplants in their zeal to re-establish wolves in the Northern Rockies.

The subsequent transplant of wolves, under the auspices of an "authorizied" and "approved scientific based" wolf recovery project was merely a facade to hide the earlier unauthorized transplants and slowly growing wolf populations. Overzealous UM wildlife academics hailed the earlier pockets of illegally transplanted wolves as "discovered" remnants of native wolves, or as wolves which had walked down to Montana from Canada on their own.

According to who is making the claim, there are now somewhere between 1,700 to nearly 5,000 wolves inhabiting the Northern Rockies. The lower number being claimed by those who lied outright about when and where this project got its start or where wolves were released...those who never did document the true number of Canadian wolves dumped into Montana, Idaho and the northwestern corner of Wyoming...or how they literally stole between $45- and $60-million from sportsmen provided excise dollars to, in part, illegally fund the Wolf Recovery Project in the Northern Rockies. The higher population figure of 4,000 to 5,000 wolves is now being claimed by the sportsmen who have seen many elk herds destroyed by as much as 80-percent by uncontrolled (and unknown) wolf numbers, and by livestock producers who have seen a four- or five-fold increase in wolf depredation of cattle and sheep over the past four or five years.

But, that's not what is being written about here. Remember, this is about why anyone looking to visit Montana, or Idaho for that matter, just might want to consider going somewhere else.

If seeing abundant wildlife is what draws you to the Northern Rockies, be warned that the sightings have gotten mighty thin - even in what was once America's wildlife wonderland...Yellowstone National Park. Before the release of those non-native, and certainly non-endangered, Canadian wolves, into the Greater Yellowston Area, the northern Yellowstone elk herd numbered right at 19,000 elk. Due to ever growing wolf numbers, extremely inadequate (more like non-existent) wolf control, and escalating depredation of that herd by wolves, the 2011 count for this herd has dropped precipitously to just 4,400 elk. And the number will drop even more dramatically this coming year, thanks to another elk calf crop that will be right at "0", and elk that are growing dangerously old without the recruitment of young-of-the-year. In 1995, the average age of this herd was 4 to 5 years. Today, the average age is 9 to 10 years, and these elk are reaching an age where reproduction becomes impossible.

The same is happening with elk, moose, deer and other big game populations up and down the northern Rocky Mountain chain.

As wildlife populations plummet, wolves are turning more and more to domestic stock - cattle, sheep, llamas, horses, and especially pet and working ranch dogs. When game becomes scarce in an area, wolves will feed on just about whatever they can run down and kill. And they don't even worry about the killing part. As often as not, they will pull down an animal and eat on it while it is alive - then leave it to die a lingering death. (These are not the wolves Walt Disney sold you, are they?)

If camping is in your plans, should you still decide to come and enjoy the beautiful scenery and fishing, be advised that you might want to bring along some armament. The best would be a good 12-gauge pump-action or semi-autoloading shot gun loaded with "00" buckshot loads - and keep it loaded and handy at all times when in camp, and especially if taking a walk with the family and pet dog or dogs. As much as it may mentally scar young children to see dad or mom shoot one or more of those sweet, loving and cuddly wolves that are hell-bent on eating the family dog, or heaven forbid, to attack a small child that may have fallen, and crying in distress, you have to think about the consequences of not taking a shot or several shots.

Still, even that is not the biggest danger. Wolves are known carriers and spreaders of more than 30 infectious diseases, including rabies, mange, and trichinosis. Perhaps the most dangerous to all other living things is hydatid disease. This is caused by the Echinococcosis granulosus tapeworm that has been carried by more than 60-percent of all wolves examined in the Northern Rockies - through the eggs of this parasite which are spread widely by the scat (feces) wolves leave behind everywhere they travel. It is not uncommon for each wolf to cover 30 to 40 miles every 24-hour period, spreading hundreds of millions, if not billions, of those eggs EVERY DAY.

The Echinococcosis granulosus tapeworm eggs are microscopic, and cannot be seen by the naked eye. Being that small, they can become airborne with just a gentle breeze - and widely spread by the stiff mountain breezes that are common for western Montana and northern Idaho. Likewise, the eggs can easily be transported by all the free flowing streams of this region. When breathed in or ingested by big game or livestock when grazing, or drinking, the eggs collect in the lungs, liver, blood stream and even the brain, where they can cause puss filled cysts. And once deposited into the ecosystem, these eggs are resilient enough to withstand a variety of climatic changes for a period of several months.

These eggs can also be passed on to humans who would drink right out of a mountain stream, or possibly breath them in when the eggs are airborne. However, the most common transfer of Echinococcosis granulosus eggs to humans likely occurs when people love on their pets, which likely collected the eggs in their hair or fur while frolicking in the wilds also frequented by wolves. Dogs especially will roll in the feces (scat) deposited by other canines, and wolves are canines the same as dogs. We all enjoy loving on our pet dogs, but that may have to be curtailed when you live in or camp and hike where there are wolves. If you allow your dog to lick you on the face, you greatly increase the chances of breathng in or ingesting the eggs of this tapeworm - which could lead to contracting cystic hydatid disease, and forming the cysts in your lungs...on your liver...and possibly on the brain. The latter can be fatal unless the cysts are surgically removed.

It should be noted that your dog can also become infected by the Echinococcosis granulosus tapeworm, especially if it is allowed to eat on the internal organ offal left behind when a hunter "field dresses" an elk, deer or moose that may have been riddled with hydatid cysts - or the remains of such left from a wolf kill. So, if you are contemplating spending some time in the "Great Outdoors" of Montana, Idaho, Wyoming, Minnesota, Wisconsin, Michigan, or anywhere else there is a thriving wolf population, make sure that little "Fluffy" has all of its inoculations up to date, as if shipping the dog off to war - because in a way you are taking them into a war zone!

But then, you're also headed into the same battle.

Montana and the other "wolf states" of this country appreciate and rely on out of state tourism, and enjoy sharing their outdoors. Unfortunately, thanks to an infestation of wolves which radical green driven groups, like the Center for Biological Diversity and the Defenders of Wildlife, have fought to allow the populations of which to grow to troublesome numbers, there are now physical and health dangers to take into consideration - for both your family and your pets. Likewise, wolves are quickly pulling down big game numbers, and seeing wildlife has become more and more challenging.

If your goal is to see a wolf, then your chances have increased greatly. But, you have to work at that. Wolves are very secretive animals, running mostly at night...while you're snuggled in your sleeping bag, with your pet curled up against you, inside your tent. Just be sure to keep that buckshot loaded 12-gauge and a good bright flashlight within easy reach...just in case wolves rush in. Or...should a grizzly decide to pay you a visit. Did you know that within Montana's prime grizzly habitat and range, the density of the big bears is greater than across all of Alaska? Or that, with more than 1,000 of the big bears in that range, the number of human maulings and deaths have increased every year?

Again, this is primarily due to the fact that the so-called environmental groups have fought management of the bears, which no longer have any fear of humans. But, that's an entirely different story. -

About The Photo Above: Our neighbor, Lisa, loves to fish...and so does her pre-school aged daughter Laynie. I snapped this photo of the two fishing for Arctic Grayling on a high Montana mountain lake during the Memorial Day weekend in 2009. The area is one of the harder hit areas now being devastated by an uncontrolled wolf population...and when fishing here I now insure that I either have my .44 Magnum strapped on...or my "00" buckshot loaded 12-gauge real close at hand.
Posted by Unknown at 8:33 AM

If you love the mountains of the West, this just could become a blog that you visit regularly. Our topics will focus primarily on the outdoors and the active lifetyle of the Western sportsman - whether it's hunting, fishing, camping, hiking, watching wildlife, western fauna, photography - or keeping track of issues that can have either positive or negative impact on the beauty and bounty of the Northern Rocky Mountains and adjacent mountain ranges.

So, enjoy the topics, discussions and the outdoor photography I will try to share as we head on up the trail together.